Maize, Sorghum and Pearl millet are important subsistent summer grain crops of Pakistan, which have been helpful in averting many food crises of the country in the past. Maize is the third most important cereal crop in Pakistan after Wheat and Rice. It is used as food, feed and industrial crop around the world. It contributes towards food security in several developing countries of Asia and Africa. Maize crop is called “the other gold” due to its diversified industrial consumption. As a very higher per acre yielding crop , it can provide subsistense to large number of persons. Food energy yielded by maize is estimated at about 6.9 million callories per hectare which is fairly high as compared to wheat ( 3.7 million) and rice (4.9 million). Prior to early seventies, about 75 percent of the maize produce was consumed as staple food in villages of NWFP and Punjab during winter season. Remaining 25% of maize produce was utilized in wet milling for production of different products including starch, modified starch and value added products. Some of the by-products were used in poultry and animal feed. Similarly sorghum and pearl millet were also used as staple diet in the production zones in Barani areas but its industrial use has been negligible in Pakistan. Later on with the change in dietary habits of the people wheat became the only staple grain in NWFP and Punjab province. Maize ranks third with respect to cultivated area after wheat & rice and first in case of grain production per unit area. Two maize crops in a year i.e. Kharif and spring are successfully grown in Punjab. Now-a-days maize grain is being used, as novelty food while sorghum and pearl millet is restricted to poultry/animal feed and pet birds. Around 60% of maize grain is used in poultry/animal feed industry, 30% in wet milling, 6% as food and 4% as seed / other purposes. The wet milling produces an array of products, by products and value additions.
The Institute is located at a distance of about 11 kilometers from Sahiwal city towards east on Lahore-Multan Highway. A regular research work on maize was restarted after partition in the year 1953-54 at Faisalabad. The Seed Farms were transferred to Research Wing of Agriculture Department in the year 1958-59 and was converted into Hybrid Maize Seed Farms for conducting research and seed production of hybrid maize on large scale. In 1968-69 the status of this farm was raised to a research institute, named as Maize & Millets Research Institute, Yusafwala-Sahiwal. Research work on Sorghum and Pearl Millet was also initiated in addition to maize with the establishment of the Institute. This Institute has released seventeen maize varieties, two sorghum varieties and two pearl millet varieties while seven maize hybrids and one sorghum hybrid was also released. This institute has also introduced spring maize cultivation in 1970 after successful experiments due to which per acre yield was increased by 30-40 %. 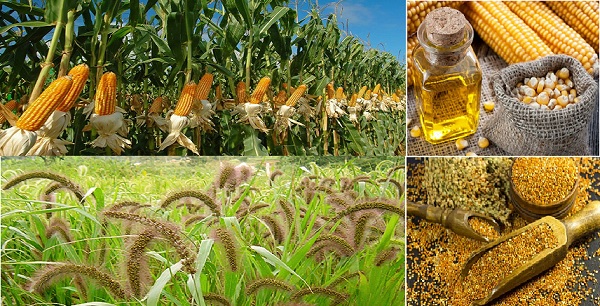